The Benefits of Turmeric

Turmeric, scientifically known as Curcuma Longa, and commonly known as a staple spice in various curry dishes, has caught the attention of researchers.  Traditionally used in Chinese and Ayurvedic medicine for it’s healing properties, western medicine has begun to conduct clinical trials to evaluate the efficiency of this herbaceous plant.  This plant native to Southern Asia may be good for more than it’s warm, bitter addition to Indian cuisine(1).

2-6% of the weight of turmeric is composed of compounds called curcuminoids.  80% of these are curcumin, the active component in turmeric responsible for it’s bright yellow pigmentation.  This polyphenol is generally recognized as safe by the Food and Drug Administration and can be found in anything from a food additive to an extracted supplement or a topical ointment(2).

Due to low bioavailability, curcumin is commonly combined with other foods to increase absorption and produce potent beneficial properties.  In one study, the combination of curcumin with a compound in tomatoes was shown to have potential in the inhibition of prostate cancer cell growth.  Along with this, further research on turmeric is in the works to discover it’s cancer combatting properties(3).

Irritable Bowel Syndrome is the underlying cause of cramping, abdominal pain, bloating, gas, diarrhea and constipation in many humans due to the inflamed intestinal tract.  A turmeric extract was used to test efficiency and over an 8-week trial, participants noticed up to a 60% reduction in symptoms.  It also has the potential to activate beneficial bacterial flora in the digestive tract(4).

The inflammation of joints, rheumatoid arthritis affects 23% of the adult population(5). Due to anti-inflammatory properties, Curcumin has been shown to be more beneficial than the commonly used treatment, diclofenac sodium.  Those in a study showed the most improvement in arthritis symptoms with supplementation of curcumin rather than the standard treatment.

Curcumin has been shown in studies to be as beneficial, if not more, than a common treatment, diclofenac sodium, whereas those who supplemented with curcumin showed the most improvement in their arthritis symptoms without any adverse side effects(6).

Atherosclerosis, the collective build up of fatty materials resulting and a thickened arterial wall, may be prevented with the use of turmeric.  After administered for only 7 days, a reduction of biomarkers were seen in individuals with a 33% reduction in lipid peroxides, 12% reduction in total cholesterol and a 29% increase in the beneficial, high-density lipoprotein cholesterol.

Traditional medicine uses turmeric as a digestive aid, to promote liver function, relieve arthritis and topically treat skin conditions such as eczema and wounds.  Turmeric is shown to be anti-bacterial, anti-fungal, neuroprotective and an antioxidant.  Though, more scientific research can always be done to prove benefits, a delicious flavor and a natural colorant can be guaranteed with the use of this spice(7).

Turmeric is used as a natural color to create Edible Glitter.  Find out more about this film technology from Watson, inc. 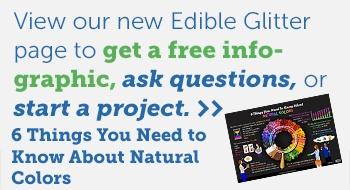 Dairy: A Food Group of Concern

Why Taurine Should Be Added to Grain-Free Pet Food

Vitamin D: A Quick Guide to This Nutrient of Concern